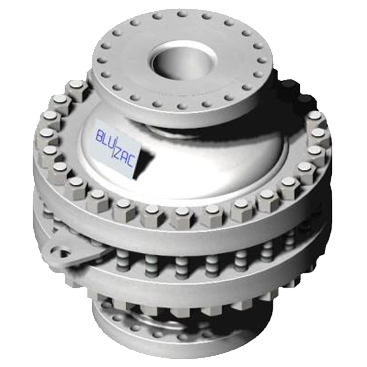 Functions by compressing a flame through channels that are too narrow to allow it to go any further.
Its construction is based on the same principle:
a cylinder called a pack, formed from hundreds of openings created by wrapping a corrugated band and a flat one over a central hub, is interposed between two flanged cones, which, once bolted, comprise the anti-explosion chamber.
On request, special versions for pressures and temperatures specified by the customer can be produced for use in a wide variety of industrial applications. In-Line model: installed straight line.

End of line model: installed at the end of a pipeline or on the top of a tank
Anti-deflagration: used to prevent deflagration, which is technically a subsonic combustion that usually propagates through thermal conductivity.
Anti-detonation: used to prevent detonation, which is different from deflagration because it involves a supersonic exothermic front accelerating through a medium that eventually drives a shock front propagating directly in front of it.

All of Blu Zac products have been designed to satisfy the requests and specific requirements of the customer, including high pressure applications.
General notes: Standard production filters include: lifting lugs, davit, basket, nuts and bolts, gasket.

Page load link
We use cookies on our website to give you the most relevant experience by remembering your preferences and repeat visits. By clicking “Accept All”, you consent to the use of ALL the cookies. However, you may visit "Cookie Settings" to provide a controlled consent.
Cookie SettingsAccept All
Manage consent

This website uses cookies to improve your experience while you navigate through the website. Out of these, the cookies that are categorized as necessary are stored on your browser as they are essential for the working of basic functionalities of the website. We also use third-party cookies that help us analyze and understand how you use this website. These cookies will be stored in your browser only with your consent. You also have the option to opt-out of these cookies. But opting out of some of these cookies may affect your browsing experience.
Necessary Always Enabled
Necessary cookies are absolutely essential for the website to function properly. These cookies ensure basic functionalities and security features of the website, anonymously.
Functional
Functional cookies help to perform certain functionalities like sharing the content of the website on social media platforms, collect feedbacks, and other third-party features.
Performance
Performance cookies are used to understand and analyze the key performance indexes of the website which helps in delivering a better user experience for the visitors.
Analytics
Analytical cookies are used to understand how visitors interact with the website. These cookies help provide information on metrics the number of visitors, bounce rate, traffic source, etc.
Advertisement
Advertisement cookies are used to provide visitors with relevant ads and marketing campaigns. These cookies track visitors across websites and collect information to provide customized ads.
Others
Other uncategorized cookies are those that are being analyzed and have not been classified into a category as yet.
SAVE & ACCEPT
Go to Top